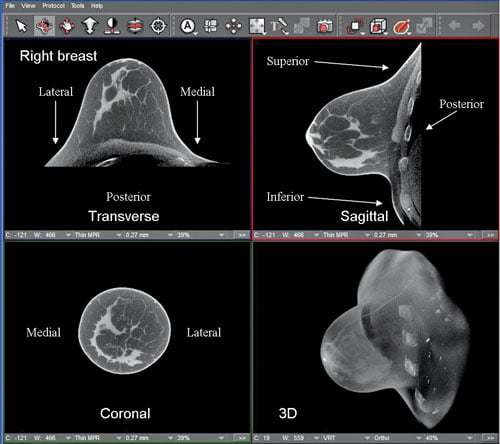 Images reconstructed from a scan done with the Koning Breast CT scanner show the heterogeneously dense breast of a 44-year-old woman in high-contrast and high-spatial resolution. The FDA-approved scanner, with its 10-second scan time and lack of breast compression, is being positioned against breast tomosynthesis and potentially breast MRI. (Image courtesy Koning Corp.)

Lying chest down, head turned to the side, breast suspended through a cutout in the table, women can routinely get a mammogram with computed tomography (CT). An alternative to tomosynthesis and potentially even magnetic resonance imaging (MRI), the 360-degree scan can be completed in 10 seconds. It provides 3-D images of the breast with no tissue overlap, requires no breast compression and can be done at a dose equivalent to conventional diagnostic mammography.

The developer of this FDA-approved scanner — Koning CT of West Henrietta, N.Y. — is among the latest to enter the CT industry. Others may be coming. Carestream Health is developing a CT scanner specifically for orthopedics. China-based United Imaging Healthcare, with scanners lauded for their performance by customers outside the United States, has opened an office in Houston.

Accompanying changes in the rank-and-file is a cornucopia of equipment deals already spilling into the U.S. market. CT scanners from industry standard bearers range from entry level 16-slice systems to ones featuring high-performance dual-energy scanning, each at extraordinary values; all optimized for low-dose: $400,000 for 16-slicers; $550,000 for 64- to 80-slice products; $1.3 million for premium scanners (although optimized dual-energy or spectral CTs may cost substantially more).

As noteworthy as these low prices are the numbers of CT platforms. Globalization is the cause of this proliferation, said industry analyst Michael Silver. “Some vendors say we need one kind of offering for the Chinese market; another one for the Japanese; this for the Indian; one for the European; multiple ones for the U.S.,” said Silver, a senior fellow at SG2, a consulting firm that advises hospitals on equipment purchases and services. “I think there are too many.”

This proliferation may be adding to cost, if not in the prices paid by customers then in the expense shouldered by industry, he said. Selling and supporting multiple platforms adds cost. “Ultimately that plays against the competitiveness of vendors in the long term,” Silver said.

The plethora of choices puts a special onus on the buyer to pick the right one. To do so, administrators must exactly gauge the patient needs of facilities — present and future — and the price they can afford in an increasingly uncertain reimbursement environment.

Cuts enacted in the wake of the Deficit Reduction Act (DRA) of 2005 reduced imaging services $2.8 billion over five years. Since then, healthcare reform has raised questions about how medical care will be paid in the future, a specter imposed by the transition from fee-for-service to value-based medicine and improved patient safety.

Currently, an unprecedented government effort to rein in patient radiation exposure is driving the purchase of new CTs. The tip of this spear is XR-29, a ruling from the Centers for Medicare and Medicaid Services (CMS) that mandates dose tracking software to record dose in the patient record; software that notifies staff about the dose before the scan; automatic exposure controls that tailor output; and the integration of protocols that will serve as references for specific types of exams.

Enacted under the Federal Protecting Access to Medicare Act of 2014, XR-29 is supposed to take effect the first of next year. Facilities that don’t comply will be subject to a 5 percent reimbursement penalty in 2016 and 15 percent in the following year. But a respite may be in the works.

Groups including the The Association for Medical Imaging Management (AHRA), American College of Radiology, Radiology Business Management Association and American Hospital Association are pushing CMS for a delay of 12 or even 18 months. And for good reason. As of October, CMS had not issued a final version of the ruling.

More than one in three CT sites surveyed by AHRA last summer could be penalized, if the CMS ruling takes effect as scheduled at the beginning of 2016. And that’s the best case.

In August, when AHRA conducted the survey,
56 percent of respondents indicated they were not in compliance with XR-29 at that time; 36 percent replied they would not be compliant even by Jan. 1, 2016.

Implementation may be delayed. But it is inevitable.

The good news for administrators of tight budgets is that — in this politically charged and economically sensitive environment — providers can pick from the best deals ever.

Editor’s note: This column is the culmination of a series of four blogs by industry consultant Greg Freiherr on CT systems. The blogs, “Three Ways CT Will Radically Change — When and How,” “Two Reasons Why CT Providers Shouldn’t Panic About XR-29,” “CT Royalty Turns to Value in Buyers’ Market,” and “High-performance CTs Flood Market,” can be found at www.itnonline.com/blogs. 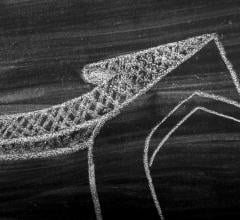 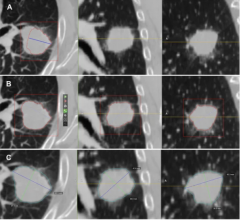 Semi-automatic lesion identification: (A) Manual ROI indication. In blue, it is possible to observe the axes that cross the lesion manually delineated by the radiologist on a plane of the MPR. The intensity of the lesion boundary (estimated) is represented with a red outline. (B) Additional axes can be dragged onto other orthogonal MPR views. From left to right, it is possible to observe the initial long axis outlined by the radiologist and the 2D contours on the axial, coronal and sagittal views of the lesion used as a starting point for the RPM algorithms. (C) Resulting 3D contour of the lesion (in blue).